i finished my first real live regulation jeans and i have to say, i’m pretty proud of myself! not long ago, even after having a great deal of success with pants, i had put jeans in the “not to bother with” category. and really it wasn’t due to any lack of skill set, but more due to the inconvenience of getting it done right. i’m looking at you topstitching thread!!! the constant back and forth, threading and re-threading my machine, then switching pressor feet all the time… ugh. not gonna lie folks—it’s a hassle.

HOWEVER, it’s totally doable. if you’re even thinking about making jeans, just know that you probably won’t crank them out in a day. so let’s get down to the nitty gritty here…

first off, this pattern (jalie 2908) gets pretty high marks from me. it is an excellent starting point that got me to wearable by version two. i’m taking a bit of my own advice and wearing them and washing them to see how they break in before i really know how they’ll fit. at this point, they’re more snug than i was going for, but denim is kinda that way. it seems as though this denim has less stretch than the corduroy of my first version, so that’s a little frustrating. just goes to show that a muslin can only show so much. 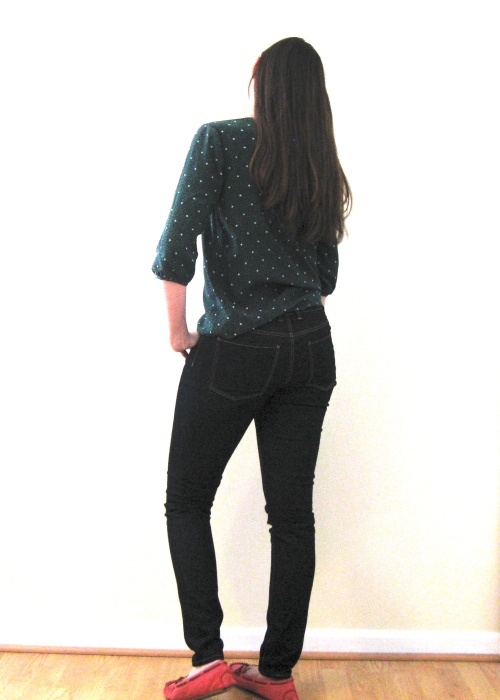 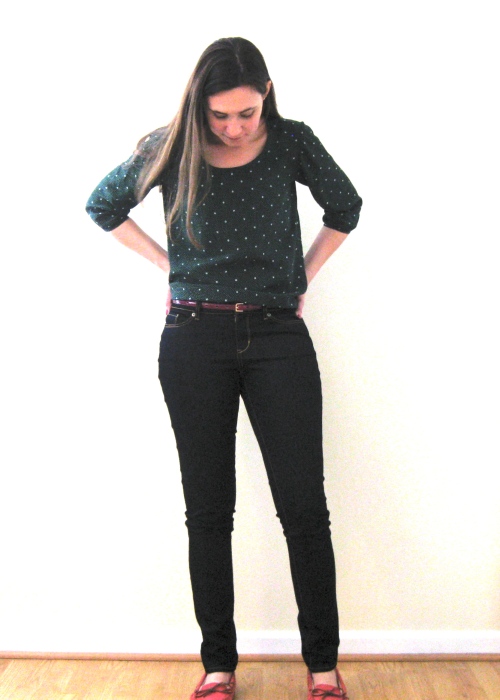 i detailed my alterations in my last post, but i thought i would re-cap here:

reduced/flattened the front crotch curve to remove the “flap.” it does seem counterintuitive to add fabric in order to reduce what appears to be extra fabric. i’ve seen various theories on this. some people remove or wedge out front crotch depth, but i could tell that the pants weren’t sitting as close to the body as my regular RTW pants. this led me to believe that the “flap” was really pull lines, not excess fabric. there are a few factors contributing to this, including full or prominent thighs, tilted pelvis, etc. really it’s all about figuring out your individual crotch curve. easier said than done, i grant you.

added to back rise. i wedged open at CB to give me a little extra rise for le bootay.

added fabric to back along the lower crotch curve. this gets rid of uni-butt and lets the fabric uh… hug both cheeks instead of gliding over them as one. sorry… tmi…

shaped the yoke. in my previous version i had to take width out of the CB and side seams (i chose size based on my hip measure—a full two sizes larger than my waist). to spread out the reduction, i made three slash and overlaps to remove the excess. this made for a very curvy yoke, but what can i say. i have-a some junk in mah trunk.

curved waistband. the jalie pattern has a straight bias cut waistband. while i discovered that i didn’t need much curve on the waistband, which i attribute to a nice fitting yoke, i still needed some curve. i determined how much by sewing on a straight piece of fabric and making a few small darts. i removed the muslined waistband and used it to make a new pattern piece.

tapered leg from knee down. while i may have over-tapered, i’m pretty close to ideal. i think if i add just the tiniest bit of width back in i’ll be golden.

and, as much as i should do another version of this pattern, i’m also interested in trying the named jamie jeans. truthfully, i wasn’t all that interested in that pattern when it first came out—i’m something of a purist when it comes to jeans—but they do have a sleek dressy edge to them that i’m really digging. not to mention that you don’t have to topstitch that curved pocket edge. that curve trips me up every. single. time.

and now for the photo dump… 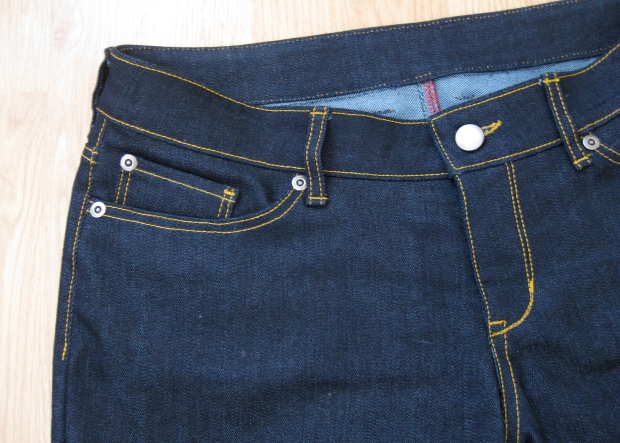 final thoughts… like i said, i’ve been wearing these for several days and am giving them a chance to get broken in a bit before i even think of making another pair. i imagine they’ll soften up soon, it always takes so long for a new pair of jeans to feel comfortable. i think the most telling thing is that my husband hasn’t noticed my new jeans! he’s usually pretty observant and complimentary about the things i have made, so i think it’s funny that he hasn’t noticed. i have to think it’s because he can’t tell that they’re any different from my RTW jeans, right?