the laurel dress by colette patterns is one of those that took a while for me to fall in love with. i suppose, like many, my reaction was a bit meh initially. however i kept loving everyone’s versions of the pattern, and eventually i decided to buy it. i knew i had to do a proper muslin first because to be honest, i wasn’t sure if this shape would work for me. woof. my first try was not good. i graded from a 6 on top (with a SBA) to an 8 on bottom. it was all sorts of wrong and i tossed it in the corner for a time out. 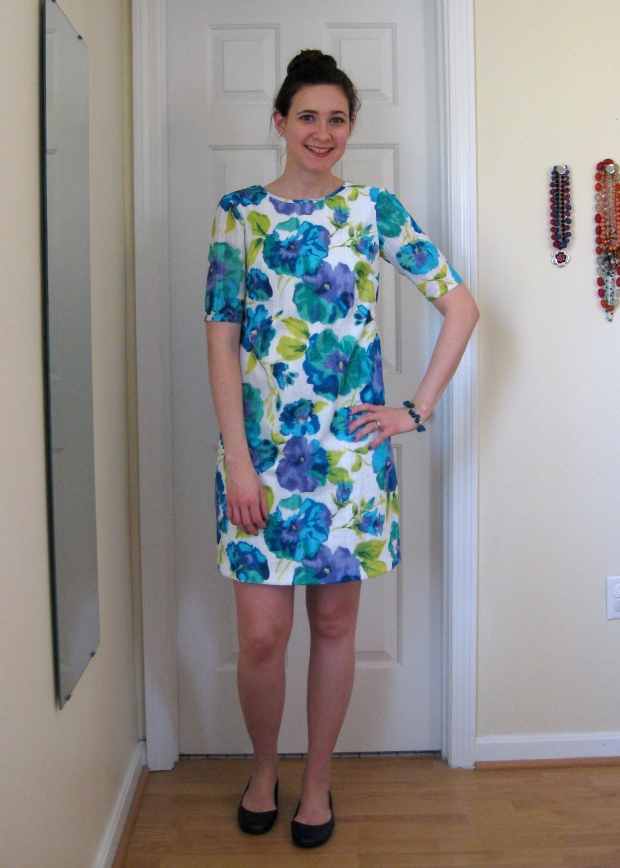 after a couple days of thinking, i decided to come down to a size 2 up top and grade out to a 6 for the waist/hip. i did a 3/8″ FSA, and removed some width at the top of the zip at CB instead of making a neck dark. ahhh! so much closer! i didn’t even bother with an SBA, and the top portion was basically perfect aside from the neck gape. i still had an issue with the hips area, so i shaved off the top of the hip curve (maybe i have low hips? actually that would explain a lot…) and called it good.

since my fabric is mostly sheer, i underlined the front and back with muslin. my fabric has this really cool woven stripe, and the underlining makes the fabric design stand out something fierce. i sewed it up, and when i tried it on i was still left with some weird upper hip flanges. i ended up taking out the curve of the hip area, and marking nearly a straight line from the top of the curve to the lower notch.

it’s weird. i struggled with fitting CP designs so much in the past—cutting, taping, butchering… as it turns out, a lot of my troubles could have been fixed by starting with a much smaller size.

this is a pretty straightforward make. i certainly didn’t rush through the sewing here, and i only needed two days. many people have omitted the zip on this dress, and i don’t know what kind of contortionists those people are, but there is no way i could get this on and off without a zip! i went with an invisible zip, stabilized with tricot fusible from sunni’s shop. this stuff is the best, and makes inserting zips a breeze! it’s been a while since i did an invisible zip, and it went in perfectly the first time. i do STRONGLY suggest that you put the zip in before attaching the front of the dress to the back pieces. it is a thousand times easier that way.

i did the bias binding at the neckline per the instructions, but the sleeves i simply turned a hem and topstitched. the sleeves are also supposed to be bias bound, but this fabric was already pretty prone to fraying due to the loose weave. i was good and stitched the hem by hand. since i had underlined the fabric, it was super easy to do this invisibly.

fit-wise, the armholes are a tad snug, so that’s something to watch out for. also, it never occurred to me to check the width of the lower edge of the sleeve—also tighter than i would have liked. next time i’ll most likely go up a size for the sleeve and armhole. then, i do have a tiny bit of gaping at the neckline. i had taken out some room at the top of the zip, but i think i could adjust the angle of the shoulder seam to help it sit a little nicer. but all in all i am very happy with how the dress came out.

and that’s about it folks! i suspect i’ll be returning to this pattern a few times since it’s so quick to make, and, let’s face it, shift dresses are everywhere these days!

There was an error retrieving images from Instagram. An attempt will be remade in a few minutes.