I’ve long admired many patterns by Named Clothing, and yet it’s taken me until now to make any of their designs. It’s silly, because they draft for a taller woman, and I definitely fit that demographic. Well, aside from my weirdly petite upper body… totally out of proportion to the rest of me. Anyhoodle… I picked up the Alexandria Peg Trousers when they had a sale a few weeks back. I’ve made True Bias’ Hudson Pants and I wear them all the time (oops, never blogged!), so I thought a less sweat pant looking alternative would be really nice for actually leaving the house in. I found a rayon twill at JoAnn’s in a nice olive color and thought they would be a perfect match. 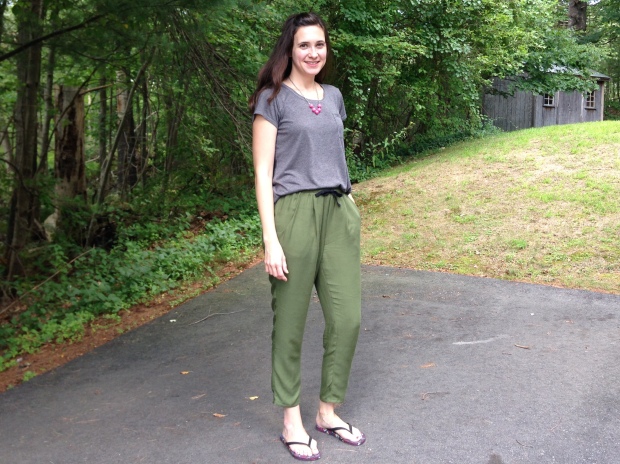 First a bit about the pattern. I got the .pdf version, which includes two sizes per file (you get all the sizes, they’re just not nested like other patterns) with seam allowances included. I thought it was pretty handy to have the SA line drawn in, as I typically need to grade between different sizes for the waist and hip. I lucked out in that the two sizes I needed happened to be in the same file, so it wasn’t all that difficult to compare the two and make the necessary alterations. Even though it should have been simple I made it as complicated as possible. Way to go, self. For the back piece I took width off at the outer seam from waist to hip, then at the CB seam from the waist to maybe 4″ or so down (just above the bum, since i need plenty of room there). Then the front piece is where I made things difficult; sine there are pockets and pleats it was kind of a mind-bender as to where to grade in or out. But if you need to grade down for the waist, just take the extra width off the side seam (most of which is pocket) from waist to hip and call it a day. The pocket opening is far enough in from the side seam that you won’t mess up the proportions.

My fabric (rayon twill) was a real pain to work with; it’s nearly impossible to cut on grain, it’s shifty, it’s fray-prone, and stretches out of shape easily. It has so much drape that the fabric itself kind of bags out under its own weight. Because of that, the pants seem to have drag lines all up and down the seams. Kind of a bummer really. To be honest, I was super unhappy with the pants when I tried them on mid-construction as I was testing the elastic length. The rise was so high, they looked like clown pants! I tossed them aside for a few days as I contemplated whether or not to even finish them.

Buuuuut I really, really hate to leave projects unfinished, so I decided to try and save them. I basted the pleats down to keep them in place so I could lower the rise. I cut 1″ off the front, tapering to 1/2″ at the back (I usually need to add extra to the back rise for boo-tay coverage, otherwise I would have done 1″ all around). I cut a new waistband, which I made about 1/2″ longer to compensate for the lower rise. I finished the pants, tried them on and was so much happier with them! Completely turned around how I felt about these pants.

However, even though I’m happy with how they look on me, they’re still oddly restrictive when I sit. I have to kinda pull the legs up to sit down, then they’re a little snug in the thighs, and tight at the knee and calf. It’s possible I should have lengthened them (I’m 5’8″—most of my height being in my legs…) as I don’t think I have particularly large calfs (13.5″). So in the end I have mixed thoughts about these pants, just not for the reasons I anticipated while I was in the throes of construction. Ultimately, I don’t think I’ll return to this silhouette in a woven fabric, but rather stick to knits.

Now to switch gears… The tee I’m wearing is a Grainline Studio Scout Tee, made in a rayon/poly blend knit. The poly is a bit eh but I super love this tee anyway. I think for a slouchy tee, the scout will always be my go-to pattern. The only thing I did differently here was scoop the sleeve hem up slightly at the center (3/8″ or so) so it doesn’t sit as straight across. Then I used my possibly favorite neck binding method of sewing the binding to the right side at a 1/2″ SA, then pressing the binding up and around the raw edge, then top stitching in place. I think this looks better than a banded finish, and involves less guesswork regarding how long to cut, or how tight to stretch the binding strip. 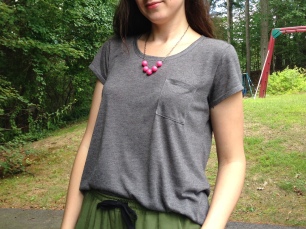 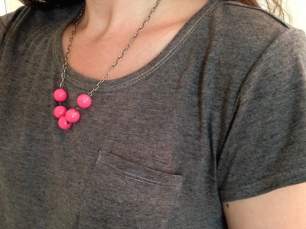 All in all, I’m pleased with my experience with Named patterns, and I look forward to making more of their offerings. I’ve seen the Inari tee/dress made up so many times (and I love every one) that I really want to give it a whirl. And they have new designs coming out very soon… can’t wait to see what they’ll be releasing!